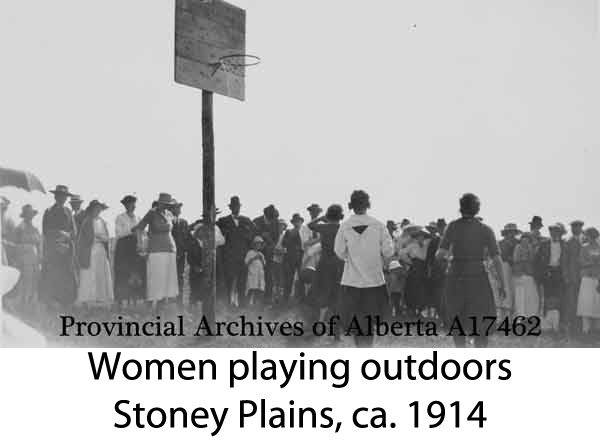 Although basketball was invented by James Naismith in 1891, it took some time for the game to take hold in Alberta. As primarily an indoor game, its early development was hindered by the lack of suitable gymnasiums. Early photos often show the game being play outdoors in summertime on a rough and unmarked surface with crude baskets attached to a pole at both ends of the court.

By the early 1900s, the game began to appear first in schools and especially in those with gymnasiums. Similarly, as YMCAs were built in cities and towns, the game became an established feature of their early programs. With more and more teams, leagues were established so that by the time World War I began, basketball in some form was played in most major centers in Alberta. It was also a game played from the start by girls and women, although the rules were sometimes modified to make the game less vigorous for females. 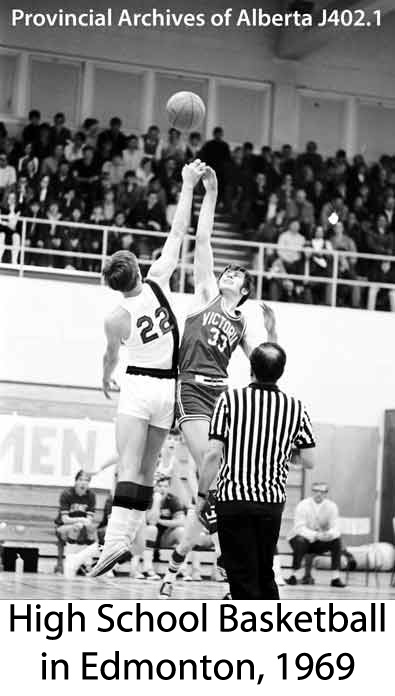 Throughout the years, basketball has remained true to Naismith's original version, although certainly there have been some rule changes during this time. Girls and women for the most part now play the same game as do boys and men. What has changed is the extent to which basketball can now be found in a multitude of clubs, community leagues, schools, colleges, and universities throughout the province. It is played by children, youth, and adults. Both the able-bodied and those with physical disabilities enjoy the game and at the highest levels of competition. Yet, for all its modern-day sophistication and organization, it can still be played as a pick-up game sometimes just one-on-one.

Chantelle Brown - Dispelling the Myth; Basketball in a Hockey Country

The history of Canadian basketball is laced with inaccuracies. Let’s set the record straight.

FICTION: The inventor of basketball was Dr. James A. Naismith

FACT: History may be fickle. Take for example the name of Dr. Naismith, the inventor of basketball.

Encyclopedias and reference books pride themselves on the fact that they are usually accurate to the letter. In this case though, the letter is in fact the problem as these books state that Naismith's full name was Dr. James A. Naismith.

If Naismith did have a middle name, what was it then? Alvin, Andrew, Ace or even stealing some basketball jargon,Well, according to his surviving family members and a few historians, Naismith never had a middle name let alone initial, despite the fact that the 15th edition of the Encyclopedia Britannica states that he adopted the initial A. in later life.

So, the natural question is now asking, "Where did that A. come from?"

"He (Dr. Naismith) always wrote James and made the last 's' in James very large," said Mrs. Naismith, who was predeceased by her husband in 1980. "It was a great big letter S coming all the way up and I guess a lot of people took it for a letter A instead. Someone wrote it that way in a newspaper a long time ago and it stayed that way."

So why didn't the good doctor speak up and correct the infraction?

"My husband said his father probably didn't care or even notice. He was just too busy. And my husband's family really didn't take notice either," said Mrs. Naismith, who resided in Corpus Christie Texas at the time of the interview. "The only time my husband said anything about his dad was when he overheard his father's name with the letter A. inserted."

Also living in Corpus Christie was James P. Naismith, grandson of the original Dr. J. "It's true what they say that my grandfather never had a middle initial," says James P., who was three years old when his grandfather died in 1939. "According to my father (James Sherman) the A. came from the way my grandfather signed his name. He always abbreviated James to Jas. and everyone took it for James A.

"I guess someone wrote it down wrong and the rest of the people just followed copycats. I guess they thought, "Hey it's in this book, so it must right," and no one ever bothered to check it out."I still see books with it wrong but with stories like this, people will have it correct in time."

The one and perhaps only Naismith offspring who seemed really upset with the name error was his second born and second girl, the late Helen Carolyn. Dr. John Dewar, whose 1965 dissertation of Florida State University was entitled "The life and contributions of James Naismith," had a chance to talk to Helen (then Mrs. Helen Dodd) at her residence in St. Louis Missouri in 1965. "She was very upset when she told me that her father never had a middle initial," says Dewar, who has been involved in all facets of Canadian basketball for more than 50 years.

"According to Mrs. Dodd, the letter A. came from the pronunciation on how he said his name. He spoke slowly and said "eh" between his name. It just came out that way and it stuck. People thought he was saying Dr. James A. Naismith. "I guess you could say it was the proverbial Canadian "eh" and his Canadian heritage. That's another one I've heard of how the A. came about. “The same was confirmed by this writer in the 1980s' when talking to Mrs. Dodd.

All five of her brother and sisters had passed away the last John Edwin in the 1980s'.

In a 1959 letter to Major James Leys, founder of the Memorial Museum to R. Tait McKenzie, another Canadian educator and close friend of Naismith, detailing the biography on her father, Helen had under his name James Naismith, in brackets and underlined - "He had no middle name or initial.”

In Springfield Mass., birthplace of basketball, Joe O'Brien then executive director of the Naismith Hall of Fame, told this writer in the 1990s' that Naismith had no middle name, "There is no legitimate proof that we know of that he had a middle name or even middle initial."

If you're still not convinced, talk to historians from Almonte Ontario, birthplace of Naismith. "We have heard or read that he has middle initial A. but no birth certificate or record shows us that," says historian John Dunn.

So why do people continue to refer to the farther of basketball as Dr. James A. Naismith? Perhaps they are copycats or unaware of the truth? Did Naismith really adopt a middle initial or name or is history wrong? Was it the way the Dr. learned how to write or was it just Canadian slang that confused everyone?

This writer has spent more than 25 years correcting the error and only recently received a letter from Encyclopedia Britannica of the correction. So is it true or not? I guess only the good Dr. will know for sure "eh".

The invention of basketball was not an accident. It was developed to meet a need. Those boys simply would not play "Drop the Handkerchief." - James Naismith

The rule was "No autopsy, no foul." - Stewart Granger, on the pickup games of his childhood.

"He's the one who's working in the NBA and I'm unemployed." - Former Canadian

National Team coach Jack Donohue (left) on advice he would give to former player Jay Triano as he was about to join part of the Toronto Raptors coaching staff.

Another Donohue gem: "If you fall into a puddle wearing a new suit, you can either whine for months about ruining your suit or check for fish."

"Oh, my gracious! They are murdering my game." - Dr. James Naismith, while watching especially physical play in a 1910 Kansas-Missouri game.

"I am sure that no man can derive more pleasure from money or power than I do from seeing a pair of basketball goals in some out of the way place--deep in the Wisconsin woods an old barrel hoop nailed to a tree, or a weather-beaten shed on the Mexican border with a rusty iron hoop nailed to one end." - Dr. James Naismith.

“I used to collect hockey cards. It was like Vegas at my school. You'd go to school with your box of cards, and at recess and lunchtime there were all these games we'd play.” – Steve Nash.