NOT YOUR TYPICAL MUSEUM

The Alberta Sports Hall of Fame provides a family-friendly, interactive experience. You will be surprised by what you discover inside! Have fun, laugh, play and discover Alberta sports heroes together. The Alberta Sports Hall of Fame is an interactive, hands-on celebration of Alberta's sporting history. Our over 7,000 square feet of exhibit space includes a multisport area with virtual baseball, basketball, football, hockey, and soccer, a 200-meter wheelchair challenge, a Treadwall climbing wall, the Orest Korbutt Theatre, Hall of Fame Gallery, and much more. Our museum has over 16,000 artifacts of Alberta sports history in the collection and showcases many of these items in a number of displays. The Alberta Sports Hall of Fame also offers an education program, group activities, and a unique environment to rent for your birthday party, special event, corporate reception or meetings.

We are located along Highway QE2, north of 32 Street in Red Deer, Alberta. Contact us for more information about our museum.

To be leaders in the province and country in protecting and sharing Alberta's sport history.

The Alberta Sports Hall of Fame has the following six core businesses:

To preserve and celebrate Alberta's rich sports history for all to enjoy.

The Alberta Sports Hall of Fame is guided by the following values in its operation:

The Alberta Amateur Sports Hall of Fame was founded by the Alberta Branch of the Amateur Athletic Union of Canada (A.A.U.C.)

Molson’s Edmonton House was the first location to displays photos of inductees.

Dissolution of the A.A.U. of C. meant that the Alberta Amateur Sports Hall of Fame would now be administered by Sport Alberta, through its Board of Directors.

Under the stimulus of the forthcoming 75th Anniversary of the Province, program objectives were broadened by Sport Alberta to begin to honour all outstanding Alberta Athletes, amateur or professional, and to begin to collect memorabilia which reflected the whole of Alberta's sporting heritage.

A contest was held and a logo was chosen from over 120 submissions. The design shows the athlete supported by the Alberta Mountains, reaching for the flame of triumph. The two halves of the design symbolize the two aspects of the ASHFM - Hall of Fame and Sport Museum.

Informal conversations were first held with the Premier regarding a permanent home for the Hall of Fame. The Program mandate was altered to regulate the number of inductees honoured each year to a maximum of seven.

The 25th Anniversary of the Hall of Fame was celebrated with 300 people in attendance at the Induction Banquet.

The Alberta Sport Council announced that Red Deer would become the new and permanent home for the ASHFM once funds were raised to build, equip, and endow it.

The ASHFM relocated from Calgary to the Red Deer Provincial Building on October 1.

May 22, the Alberta Sports Hall of Fame and Museum officially broke ground towards building a permanent home in Red Deer.

July, the Alberta Sports Hall of Fame and Museum moves to its new permanent location by Heritage Ranch in Red Deer.

The Alberta Sports Hall of Fame and Museum underwent a large expansion project to add on a new collections facility in the back of the building and create two new galleries Ice & Snow – The Spirit of Winter; and the Hockey Alberta Hall of Fame.

Great Moments of Sport History Theatre underwent renovations to create the "Great Moments in Alberta Sports” Mural on the walls. Thank you to the Edmonton Knights of Columbus Hockey Association for their donations.

Updated sponsor wall in the Lobby, including new TV and speakers to greet guests at the start of their visit. 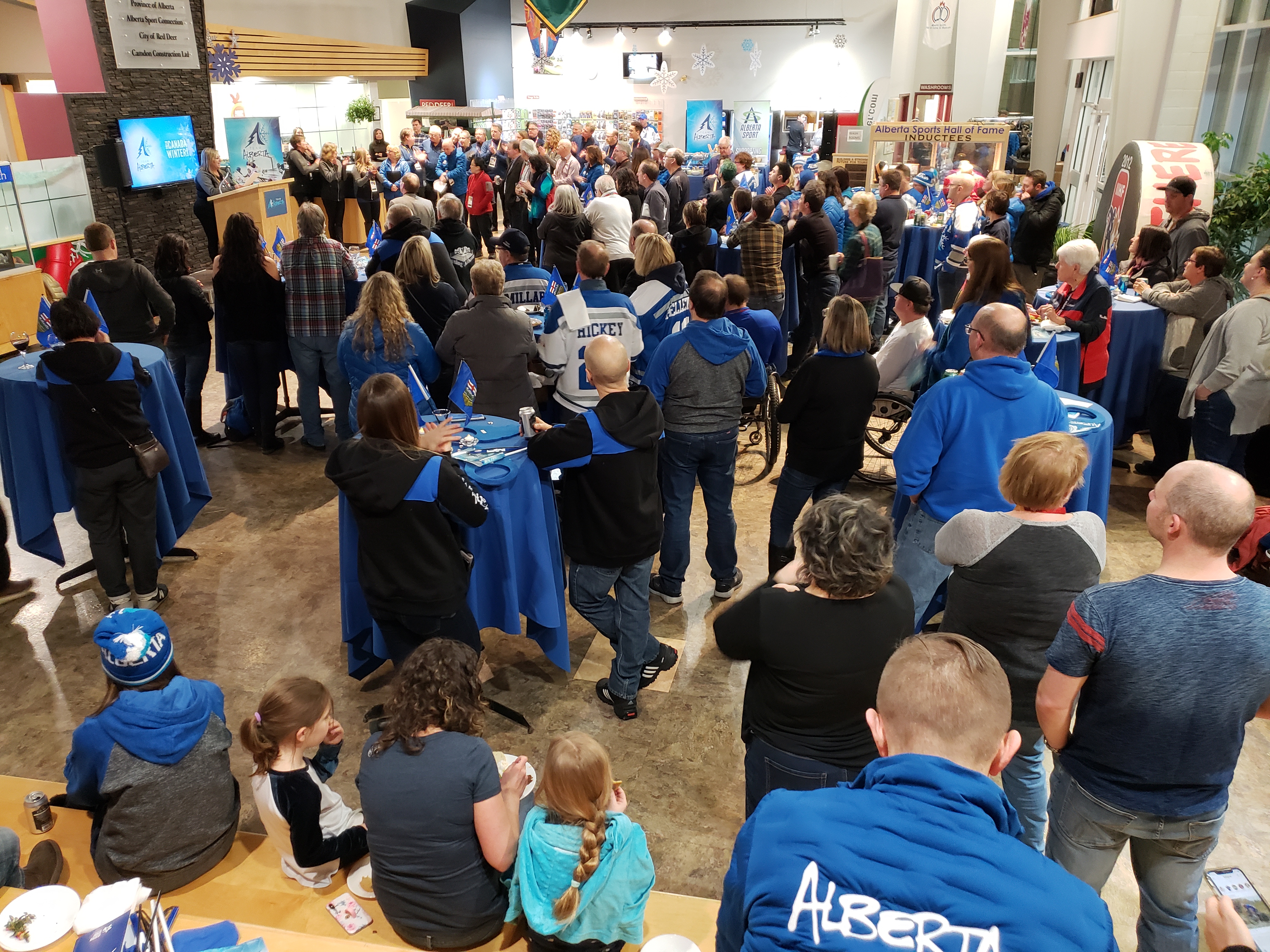 ASHFM partnered with the 2019 Canada Winter Games held in Red Deer. We hosted a number of provinical teams and had staff volunteering at various events and locations around the city.

ASHFM underwent a new branding process, which resulted in the creation of a new logo 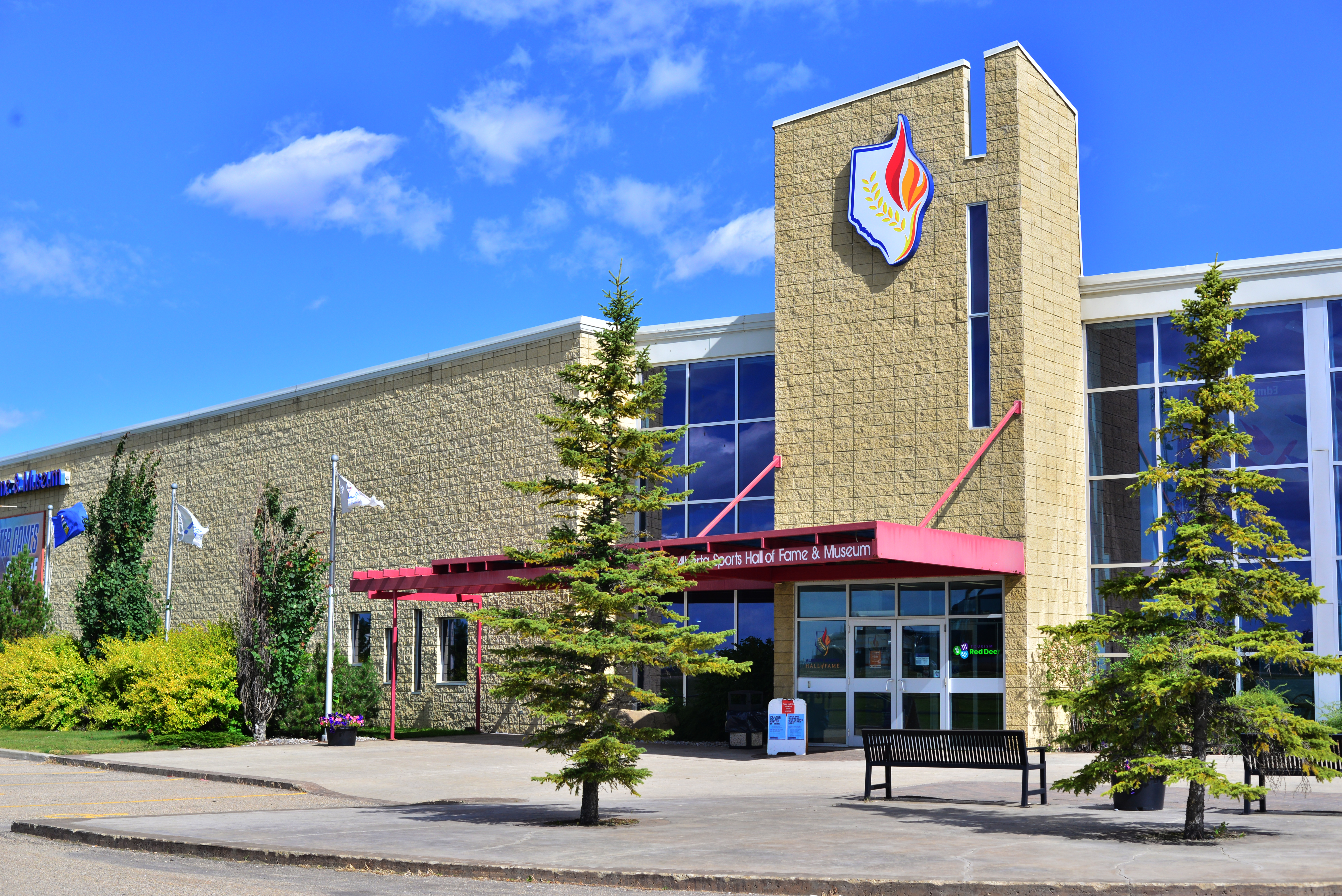 , website, and facility upgrades. We installed several new interactives including a green screen Selfie Station and an improvement to our bobsliegh interactive creating the Lyndon Rush Bobsliegh Experience.